Michael Reisor is observant. In scoping out new properties or sitting in cafés, the Douglas Elliman real estate agent keeps his notepad at the ready, preparing to transform the absurdity of daily situations into art. Reisor wants to say what we’re all thinking, and his pithy, minimalist paintings have begun to decorate the walls of transcontinental eateries like New York City’s Milk Bar and Austin’s own Little Ola’s Biscuits. On the heels of his first solo show at Ani’s Day and Night, Reisor talks inspiration, imposter syndrome, and the future of his art.

In 2020, you started your art Instagram, @michaelonpaper. What was the incentive behind that?

I’ve always loved having a running list of observations and things I find funny. I grew up watching Seinfeld, and after my parents made me go to bed, I would sit under the sheets watching it on a little portable TV. I wanted to pair my observations with something visual, so I got some paint. I found it fun and relieving in a visually creative way, like I was making my own thing. In real estate, I’m selling other peoples’ beautiful creations. Whether it’s an architect, interior designer, or builder, I’m just selling it. I reposted my art on my personal account with some courage. I thought, are people going to take my real estate less seriously? But people were like, “This is hilarious.” I started getting these kinds of responses, and I just kept doing it. I think what people admire is you being you.

Walk me through your creative process.

It’s definitely a two-fold process. It doesn’t happen that I sit down, have all the paints ready, and I just start thinking of stuff to put on paper. I write them down, put the image in parentheses…and sometimes, like with comedy, I revisit it later to see if there’s still something there. 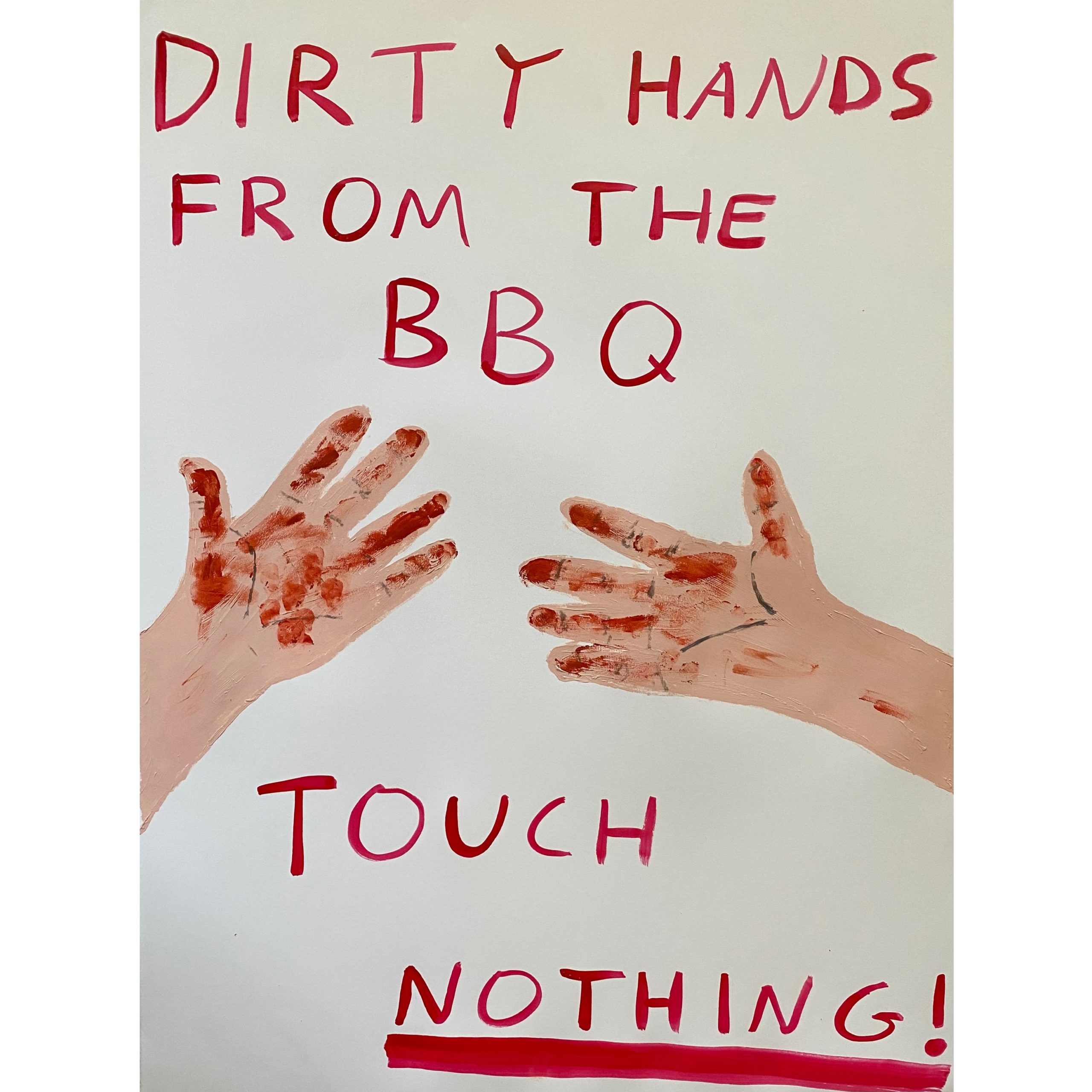 How would you describe your art in your own words?

I would describe it as what we’re all thinking. Sometimes that’s really metaphorical, sometimes it’s super literal. Most pieces are referential to the image itself in a very exacting way. I’m inspired by a lot of contemporary artists in scale, in that freedom to do whatever I want. I draw on the two mediums of conceptual art and comedy. I pay strong attention to punctuation and word use to create comedic timing.

Many former clients visited your first show, and some of your top buyers are familiar interior designers. Are there other ways that real estate and art overlap for you?

Absolutely. Some of the pieces are directly influenced by real estate. Like the “Babe,” series. Those are direct quotes from my work, things I hear every day. It’s very much influenced by what I see and hear on showings.

You walk into a place like Little Ola’s and see your art on the wall. How does that feel?

Unreal, to be honest. It feels unreal. Walking in and seeing it framed makes me feel a totally different type of satisfaction and happiness than I’ve felt in anything else. And that includes other creative pursuits, which [caused] a lot of anxiety. This doesn’t feel stressful for me. It feels like I am doing what I love to do, and I feel so honored that someone else is taking part in that. 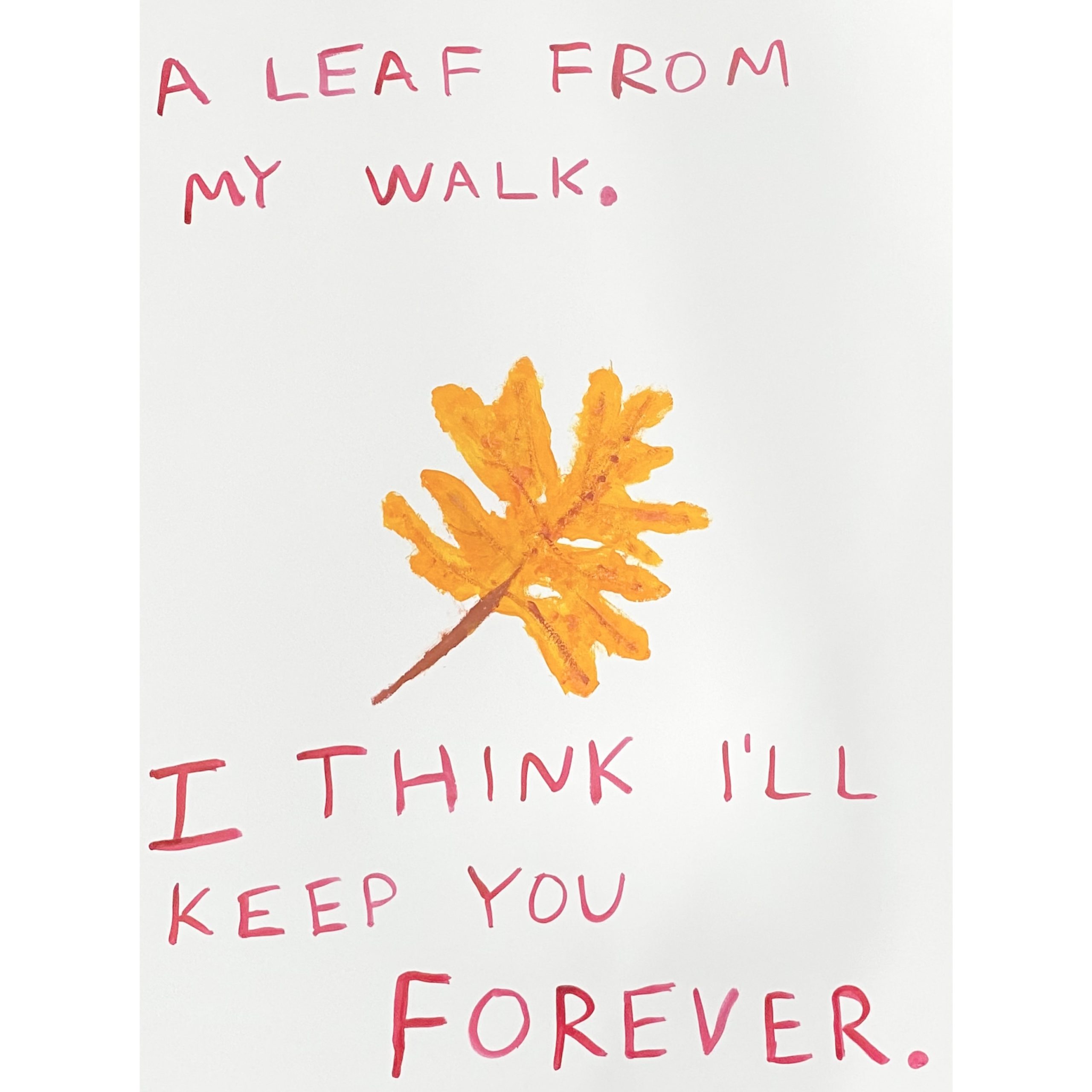 I see myself definitely as an artist, and I want to pursue this the most that I can … I always joke that I would love for my art to take over my life. I want to see real estate and art as parallel things in my life, both important parts of my identity. There’s been talk of being commissioned to do, like, traffic-facing murals. I want to continue to do large-format pieces, whether that’s canvas or more sculptural pieces. And I’ve also been incorporating photography, to take it out of the conceptual a little bit more.

CG Roxane Goes Straight to the Source in its Newest Campaign

Colombia Peace Commission Calls For Overhaul of Army and U.S.-backed War on Drugs

Oil Tanker Is Stopped by U.S. in Transit From Russian Port to New Orleans

CG Roxane Goes Straight to the Source in its Newest Campaign

Colombia Peace Commission Calls For Overhaul of Army and U.S.-backed War on Drugs

Oil Tanker Is Stopped by U.S. in Transit From Russian Port to New Orleans