As a candidate last year, Mayor Eric Adams denied that he co-owned a Brooklyn co-op with a close friend — claiming that he’d gifted his shares to her more than a decade ago.

He did not disclose the existence of the one-bedroom apartment on Prospect Place, or his 50% share in it, in financial disclosure forms filed as Brooklyn Borough President from at least 2016 through 2020.

But last fall, the day before the general election, Adams changed his story completely — amending his disclosure forms for all those years to admit he continued to hold half the shares in the co-op he owned with a “good friend,” Sylvia Cowan, a review of records by THE CITY shows. He did not publicly disclose the change at the time.

The change in Adams’ narrative emerged Wednesday as the city Conflicts of Interest Board released financial disclosure forms for city elected officials covering the year 2021.

Adams’ amended forms contradict the tale he told THE CITY in early June of last year, days before the June 22 Democratic primary where he would eventually eke out a victory by fewer than 7,200 votes.

On Wednesday, Adams declined to directly respond to multiple questions from the press about his ownership of the co-op. But his spokesperson Fabien Levy repeated Adams’ past statements that the ownership was “transferred” to Cowan years ago.

However, Levy admitted the ownership is not yet “fully transferred,” and THE CITY confirmed that Adams continues to own a 50% share of the apartment. Levy claimed the financial disclosure forms were amended after Adams “proactively and personally called COIB before he took office and asked about what amendments needed to be made to past filings.” And he stated that Adams’ hasn’t received any rental income from the property since 2007, when Adams said the transfer was initiated.

On June 15, 2021, THE CITY reported on evidence that Adams continued to have a stake in the unit. At the time, he insisted that he’d gifted his shares to Cowan back in 2007, providing a letter to that effect dated Feb. 9, 2007. Cowan did not sign the letter, though Adams’ signature is there. 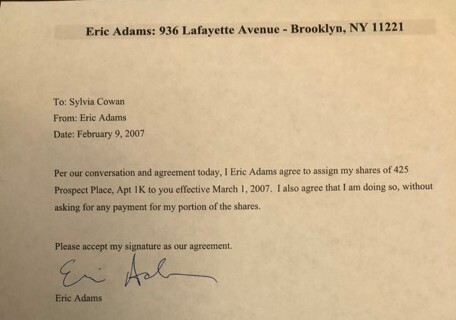 The letter Eric Adams says shows that he turned over his shares in a Brooklyn co-op — for free — in 2007.

THE CITY found records indicating his continuing ownership and noting that he’d never filed a gift tax form with the IRS as would be required for such a transaction. In response, Adams blamed Cowan for not filing paperwork that he said would have set the record straight.

His story didn’t change until Nov. 1, the day before the general election, when he quietly filed amendments to his Brooklyn borough president disclosure forms dating back at least through 2016, according to the COIB.

The original disclosure forms Adams filed for 2016, 2017, 2018, 2019 and 2020 are no longer available on the Conflict of Interest Board website but were obtained by THE CITY. In each of those years, there’s no reference to the Prospect Place co-op on the original forms.

In the amended forms, his ownership of the unit suddenly appears for each of those years. It also appears on his 2021 form, which was released Wednesday.

COIB said the amended forms were posted online “a few days” after they were filed — suggesting they became public only after the general election.

The multiple years of amended disclosures raise questions about the truthfulness of his original filings.

As THE CITY was inquiring about the co-op’s ownership, Cowan asked the co-op board for approval to transfer Adams’ portion of the ownership to her in May 2021 — and received it. But she never filed paperwork to complete the transfer, according to a source familiar with the co-op’s operations.

Adams, who served in the NYPD for over 20 years and attained the rank of captain, also owns a 4-unit townhouse in Bedford-Stuyvesant and co-owns a co-op in Fort Lee, N.J., along with his partner, Tracey Collins.

The financial disclosures that are required by the city government aren’t the only filings that Adams has had to amend in recent years.

Last year, Adams amended his 2017 through 2019 federal tax filings with the IRS after PoliticoNY and THE CITY wrote about his failure to report rental income for the townhouse he owns in Bedford-Stuyvesant — even as he reported that income in city disclosures.

His campaign initially said the income wasn’t reported because it had been offset by expenses, but later said he would amend the filings.

When those changes were shared publicly a few months later, THE CITY identified further errors in those amended tax forms: Adams claimed the townhouse on Lafayette Avenue was his primary address but reported “zero” days of living there to the IRS.

At the time, Adams’ mayoral campaign spokesperson again promised that amended forms would be filed.

To date, neither the 2021 campaign nor City Hall has confirmed whether the tax forms were amended a second time, and Adams hasn’t released any of his tax forms since becoming mayor.

There was an error. Please try again later.

Get THE CITY Scoop

Thank you for your submission!

Netflix Disrupted Entertainment With Binge Viewing. Now Can It Avoid Disruption Itself?

Markets Head Toward Worst Start to a Year in Decades

Netflix Disrupted Entertainment With Binge Viewing. Now Can It Avoid Disruption Itself?

Markets Head Toward Worst Start to a Year in Decades

Looking for Broccoli as Digital Art? Just in Case You Are, It Will Soon Be Available.